Amanda Mendiant is a painter, illustrator (b.1975) raised in Paris, to a swedish mother and a french father. After stays in Sweden, France and Spain she settles for the arctic north of Sweden.

Amanda has been drawing and painting as long as she can remember, she says and got primary known for merging french feminity, genders, nordic angularity and strong presence in portraits of women who have been her focus in the past 20 years.

Mid. 1990, an Arts&Crafts school and an Illustration&Design degree (Berghs Stockholm) in hand she starts to work in the skateboard business and this period has shown to be a significant influence in her early works.

Amanda then joins a leading web design bureau in Sweden as an illustrator but in 2003, breaks out to create her own company ”Amanda Mendiant – Art & Illustration”. A couple years later, a retail section called House Of Mendi is launched.

Among sources of inspiration she would name artists such as Egon Schiele, Gustav Klimt and Tamara de Lempicka but also photographers, Richard Avedon and Jean Loup Sieff only to name a few. Photography, Art Déco, portraits, ballet and contemporary dance, airports and antique shops, book covers… Odd details and contrasts, are keywords that keep nourish her always evolving work. 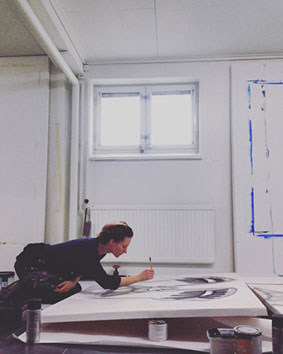